Deadpool, the famous 4th wall breaking, no filter, anti-hero of the Marvel Universe. This character has been continually growing in popularity and has managed to become known as not just a comic book nerds’ hero to being a pop culture figure that most people would recognize. 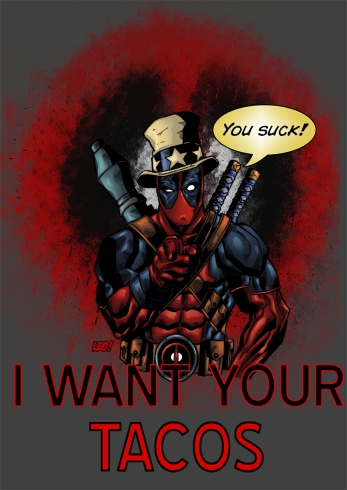 In case you do not know of Deadpool, I’ll share a little bit about him. Most people want to see the hero behind the mask but with Deadpool, that may not be the case. Due to his ability to regenerate very rapidly and having cancer, he has basically become a walking tumor and his skin is quite messed up. He knows how to use most forms of weaponry, but he tends to favor his duel swords. He is a mercenary so he usually does what he wants and what makes him more money. Sometimes that leads to him helping other heroes, but occasionally this also has him fighting those same heroes. He is obsessed with tacos and women and himself. Overall he does whatever he finds funny and beneficial to himself. 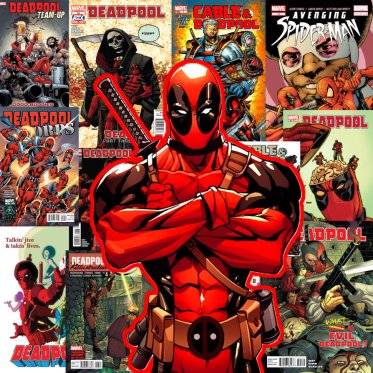 Why does this one character in particular stand out? The answer relates to what Lynda Holmes suggests in “What Monkeys Eat: A Few Thoughts About Pop Culture Writing” about monkeys and why things become pop culture:

“Justin Bieber, Duck Dynasty,  Breaking Bad, Gravity, and — yes — even Miley Cyrus twerking are all examples of what monkeys eat. Some good, some bad, some completely baffling. But all things that are making their way into a lot of people’s thinking, and provoking all kinds of conversations that we might not have otherwise.”

These are examples of things and people that do questionable or ridiculous things that people fall in love with.  These relate to Deadpool because he too does what he wants whenever he wants, whether it’s running into heavily armed facilities guns blazing, trying to hook up with any girl possible, or even killing all of the Marvel heroes. He does whatever he wants, which entertains and interests people. It makes them want to talk about his wild shenanigans.

Everything about him is absurd and completely random. It keeps his viewers constantly guessing as to what he will do next. He obsesses over tacos and and his famous catch phrase is “chimichangas.”  He has comic books and makes television appearances, as well as his own video game and movie, coming out in 2016. Typically you can even find legions of Deadpool cosplays at various cons.

The Deadpool movie in itself showed how much of a pop culture character he has become. Test footage from the movie, never meant to be released, was leaked and the fans’ reaction were so great and numerous that they decided they would indeed be making a movie. Originally they were going back and forth about whether or not it would be worth making but because of the reaction from our pop culture, the movie will be made.

Overall, Deadpool is a Marvel anti-hero that people tend to enjoy for his crazy do what he wants random personality. He is unique with his inappropriate jokes and breaking of the 4th wall on a regular basis. He has become a figure of pop culture because of how unique he is it makes people want to talk about his bizarre antics and even if this monkey isn’t the best role model people are entertained by him and enjoy watching him. As long as he maintains his shock and appall style he will remain a popular character in and out of the nerd universe.

Picture your dream girl or guy. Most likely he’s tall, deep voiced, well-built, and toned, and she is tan long-legged, thin, bombshelled with a rear to boot; but how many people out there actually fit those images. Not too many, right? If that’s the kind of person people want, what are the rest of us short, chubby, flat chested, small muscled people supposed to do. Start hitting the gym every day? Pay thousands upon thousands of dollar for surgery? Cry ourselves to sleep because our body isn’t good enough? Well that used to be what many people did, until recently that is. More and more people have been supporting body ownage and love your body movements. 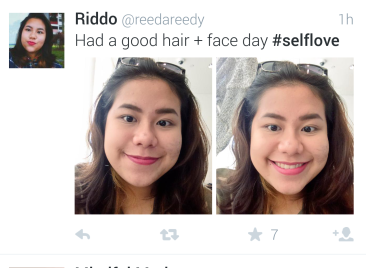 One of the earlier and leading supporters is Dove. Based on the book, Understanding Media and Culture: An Introduction to Mass Communication, a tastemaker is a person or organization that “helps to shape what we care about,” and sometimes businesses will become a tastemaker to make them more appealing to the public. Dove is one of these business. They continually make commercials featuring normal looking women being made to feel comfortable and proud of their skin, their body. This seems like they are helping a great cause and maybe that is the reasoning behind it, but one could argue that they do it to make their company and soap products more desirable because consumers would be buying from a generous business. One of the newer trending movements is #selflove, which features pictures and stories of both men and women loving their bodies for every curve, every scar, every stretch mark of them. Organizations like Dove may have started these boost your self-esteem movements, but it is pop culture and the use of social networking that made it as big as it is today. Tumblr users spread the Dove commercials all over, inspiring Twitter and Instagram users to start tags like #selflove and get that trending. Pop culture has been playing a major role in spreading a fantastic cause.

The body ownage movement goes beyond the hashtags and is being spread through YouTube as well as everyday media like magazines and music. There is a channel on YouTube called BuzzFeed where many videos have been dedicated to a group of 4 or 5 guys putting themselves through many beautifying processes that women take to look ideal. Their comments after the videos tend to focus on how silly and ridiculous some of it is, the respect that they gain for women willing to do the activities regularly, and how wrong they think it is that some women feel they must do those things to be beautiful. They even did a mock photo shoot of the famous “break the internet” picture of Kim Kardashian. The image had been spreading like wildfire through social media and trended for a while. They praise her being willing and able to allow herself to be that vulnerable for basically the entire world. They also talked about how the photos she released also helped the cause of loving the body you have and not being afraid to own it.

The last part of pop culture that helps with the body ownage, #selflove type movements is our music. Specifically songs like Meghan Trainor’s “All About That Bass”, whether intended or not, it passes along the same message of loving your body even if you are more on the curvy side. She even makes sure to add a line, so that people won’t feel ashamed of being skinny and lacking a “bass”, which is “Go ahead just tell them skinny bitches that, no, I’m just playin.” The idea of loving your body for the way it is, is spreading throughout all forms of social media and has become part of our pop culture and may, even, someday become part of our normal everyday culture.