NBA 2K is an annual basketball video game franchise that was created since 1999, and was developed by visual concepts. This video game was originally published by Sega on the Sega Dreamcast but after Sega discarded its support for Sega Dreamcast, the series had to move under the support of 2K sport. “Its primary competitor in the marketplace was the NBA Live series from EA Sports.”

One of the main things that make NBA 2K so popular, causing fans to want to buy the game, is the vast improvement that have been made in the game throughout the years. NBA 2K has always been an extraordinary game since its release on February 17, 1999; but over the last few years the visual concepts, storylines, gameplay and stimulations within the game have improved tremendously. This improvement, along with the real-life drama that occurs within the game has had a major effect on its audience, allowing its sales to increase a great deal. Just last year in December, NBA 2K14 surpassed “Madden as the best-selling next-gen sports title – – the first time an NBA game has outperformed other sports game (namely Madden) during a console’s launch.” “The Clipper just sold for a record two billion dollars. And more people than ever — even people that don’t pay attention to basketball – were tuned in with multiple storylines: Donald Sterling, courtroom drama, LeBron returning to his hometown.” These are the main things that catch the attention of the audience.

According to Linda Holmes, “… if you were really interested in monkeys, and you wanted to understand monkeys and be of value and use to them, you would not only have to under what monkeys ideally eat, you would also have to understand what monkeys actually eat and how it affects them and why they make those choices….” (Holmes). When Linda makes this statement, she is basically saying that in order to know a person you must first analyze their behavior towards things and why they respond or react the way they do. And the NBA 2K creators have been very good at doing this. Over the last few years, the creators of NBA 2K have been analyzing the way the basketball players behave, and then applying such behavior into the game in order to it more authentic. They have also been studying the things that fascinates their audience/fans the most and how they react or respond to certain things in the game; and they see that the fans are mainly driven towards the authenticity of the game.

If a person enjoys playing sports such as basketball, football, or soccer in real life, more than likely they are going to enjoy playing those games in a video game, and the more realistic the game is, the more tuned in they’re going to be. People love to see authenticity even in games; especially if the game is related to something that they enjoy in real life. According to Erick Boenisch, “They want to see their favorite players look like they look and act like they act and behave like they behave.” (Boenisch) When fans see such legitimacy in a game they become extremely fascinated and are forced to buy the game so that they could become a part of the awesome experience. And so far, all of the upgrades and enhancements that occurred within 2K are raising the authenticity of the game making it more and more realistic.

Although NBA 2k is just a video game it plays a major role in any NBA fan’s life. It extends their experience with basketball in a virtual reality world, allowing them to have full control of their favorite player and at the same time giving them the power to determine the outcome of the game. Since NBA 2K consist of all the NBA teams and players and a few of the Euroleague teams (with the addition of 11 that were included in 2k15), no one has to miss out; everyone is able to pick whichever team and player they want. In addition, each player’s personality is based on how they really behave in real life, which makes it even more interesting. 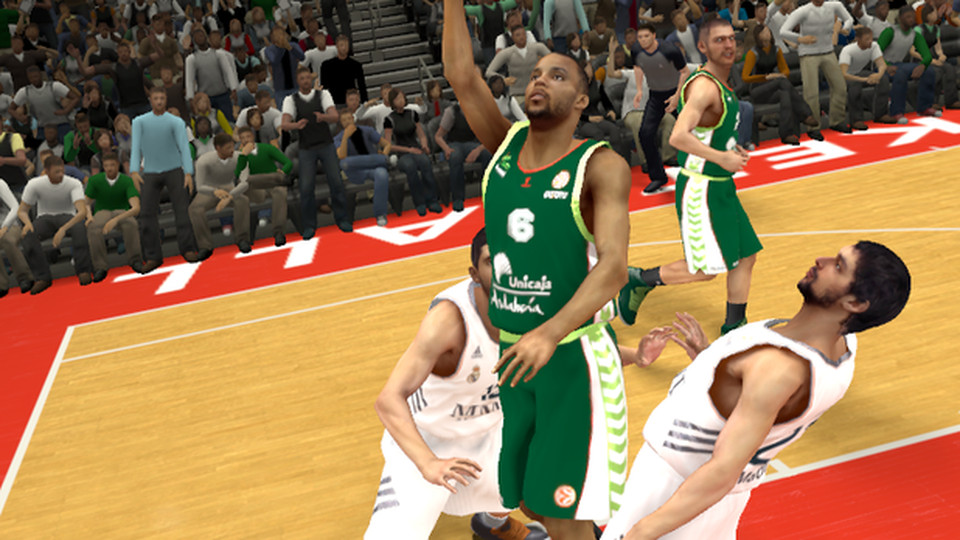 Most people that purchase NBA 2k games are NBA fans; and yes they are going to want to play with their favorite team along with some of the top players in the NBA such as LeBron James, Kobe Bryant, or Kevin Durant (just because they’re the best) to make their way to the championships. What more would an NBA fan want than to have that authentic experience of controlling the actions of their favorite players and leading their team to victory.

Over the past few years NBA 2K has made great progress with the authenticity of the game and have been very successful at impressing the fans; as long as there are basketball fans around this trending is going to continue.